‘Tatort’ (English: crime scene), the highly popular police procedural, celebrates its 50th anniversary this year. Each episode of the long-running series is produced by a different public-service broadcaster in the German-speaking world, including Austria and Switzerland. Episodes are set in different cities, each with its own team of investigators.

One of these teams is based in Vienna, and it has even more reason to celebrate: ‘Unten’ (Down below), the episode that is currently being produced, is the 50th case for Lieutenant-Colonel Moritz Eisner (Harald Krassnitzer), and his fellow investigator Major Bibi Fellner (Adele Neuhauser, the 2015 Josefstadt Woman of the Year) has been on the team for 10 years.

Shooting for ‘Unten’ was underway in and around the legendary Café Anno in the 8th district when the coronavirus lockdown was declared in mid-March, effectively forcing the entire Austrian film industry to a standstill. It is unclear when filming will resume but fans need not despair: two new episodes, ‘Pumpen’ (Pumping) and ‘Krank’ (Sick), are scheduled to air later this year. 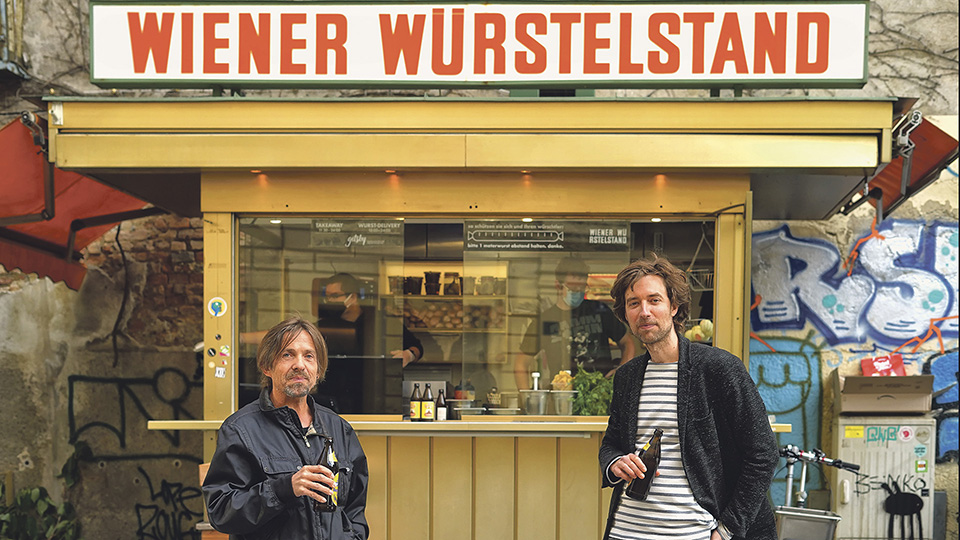 The former is the ‘Tatort’ screenwriting debut of Robert Buchschwenter and Karin Lomot and also features several locations in the Josefstadt, most notably the Würstelstand (sausage stand) in Pfeilgasse.
‘der Achte’ set out to gather evidence and interview witnesses – and what better place for this than that very Würstelstand? We talked to two ‘Tatort’ screenwriters who both have close ties with the Josefstadt: the above-mentioned Robert Buchschwenter and Lorenz Langenegger, whose cases take place in Switzerland.
The Josefstadt is familiar territory for Buchschwenter, who originally comes from South Tyrol: He cycles through the district every day, and ‘many of my friends live here, too’. Swiss-born Langenegger moved to Vienna with his partner over ten years ago: ‘Our first apartment was in Stol­zenthalergasse.’ Today, he still has a ‘study’ in the 8th district. And, as befits a ‘Tatort’ writer, it is in Pfeilgasse – where else?

The student residence on Pfeilgasse 3a, vis-à-vis from the sausage stand, was a central ‘Tat­ort’ location for several years: its former canteen housed the series’ police headquarters. ‘Tatort’ extra must have been a veritable ‘dream job’ there.

For Langenegger, the Josefstadt is his dream district: ‘I love its mix of bourgeois middle-class and young and urban spirit,’ he says. Who would have thought that Swiss ‘Tatort’ cases are written in Vienna? The two unwitting partners in crime, as it were, had never met before and were happy to share expertise on their work and their characters. We at ‘der achte’ think that this definitely calls for a Josef­stadt-inspired, cross-border episode. It wouldn’t be the first time for different teams to cooperate across regional or even national borders. ‘Tatort’ bosses, what are you waiting for?

From the theatre to the silver screen

END_OF_DOCUMENT_TOKEN_TO_BE_REPLACED

Return of a legend

Vienna’s 8th district has a rich theatrical history. Its biggest stage is Theater in der Josefstadt.
The highlight of the Josefstadt season will be

END_OF_DOCUMENT_TOKEN_TO_BE_REPLACED

The 8th district is a great place to discover the countless musical treasures that Vienna has to offer. ‘Vienna Calling’ was a major hit